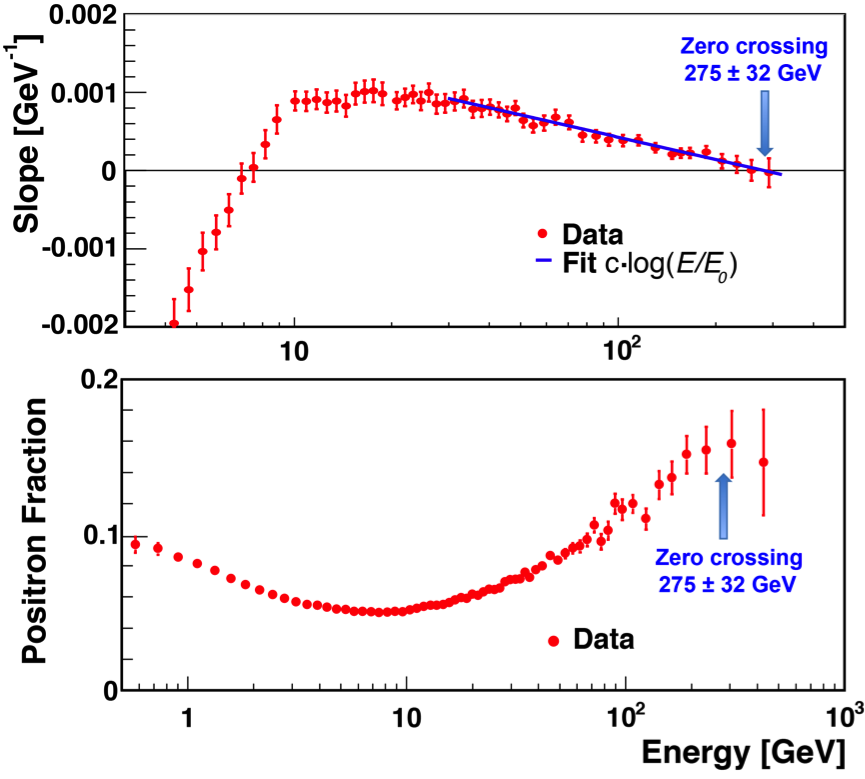 Geneva, 18 September 2014 - The Alpha Magnetic Spectrometer (AMS1) collaboration has today presented its latest results. These are based on the analysis of 41 billion particles detected with the space-based AMS detector aboard the International Space Station. The results, presented during a seminar at CERN2, provide new insights into the nature of the mysterious excess of positrons observed in the flux of cosmic rays. The findings are published today in the journal Physical Review Letters.

Cosmic rays are particles commonly present in the universe. They consist mainly of protons and electrons, but there are also many other kinds of particles, including positrons, travelling through space. Positrons are the antimatter counterparts of electrons, with the same mass but opposite charge. The presence of some positrons in space can be explained from the collisions of cosmic rays, but this phenomenon would only produce a tiny portion of antimatter in the overall cosmic ray spectrum. Since antimatter is extremely rare in the universe, any significant excess of antimatter particles recorded in the flux of energetic cosmic rays indicates the existence of a new source of positrons. Very dense stars, such as pulsars, are potential candidates.

The AMS experiment is able to map the flux of cosmic rays with unprecedented precision and in the results published today, the collaboration presents new data at energies never before recorded. The AMS collaboration has analysed 41 billion primary cosmic ray events among which 10 million have been identified as electrons and positrons. The distribution of these events in the energy range of 0.5 to 500 GeV shows a well-measured increase of positrons from 8 GeV with no preferred incoming direction in space. The energy at which the positron fraction ceases to increase has been measured to be 275±32 GeV. 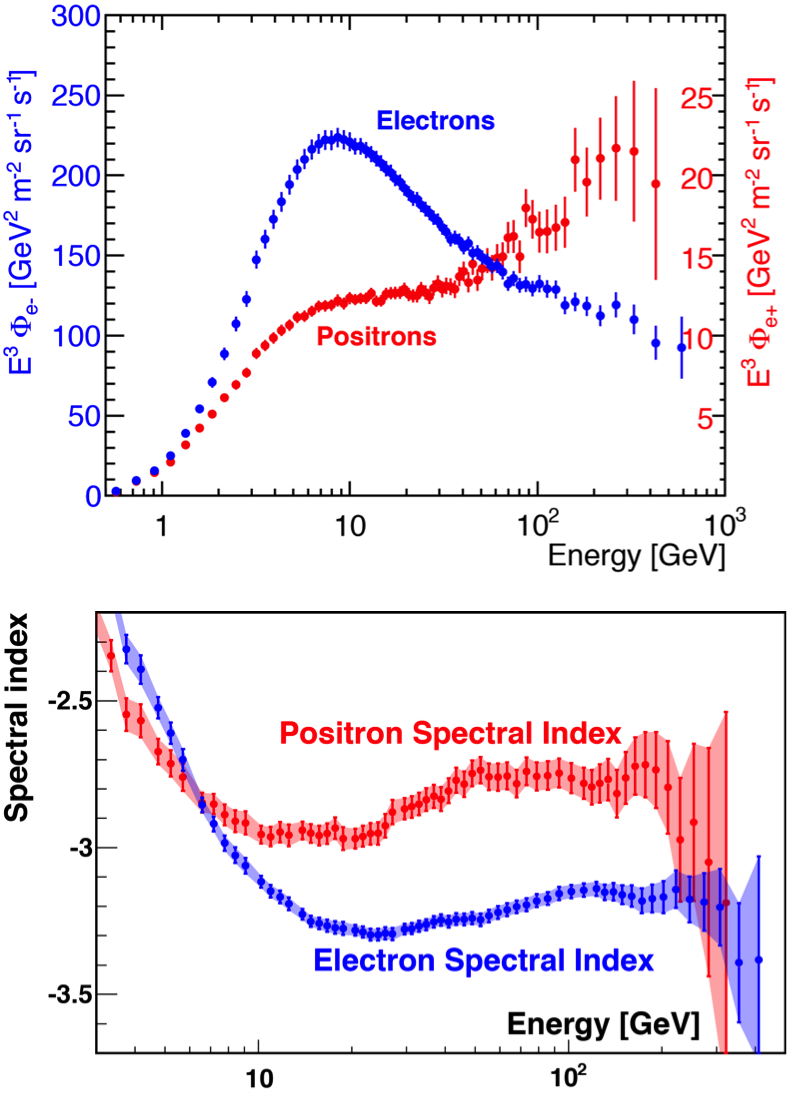 This rate of decrease after the “cut-off energy” is very important to physicists as it could be an indicator that the excess of positrons is the signature of dark matter particles annihilating into pairs of electrons and positrons. Although the current measurements could be explained by objects such as pulsars, they are also tantalizingly consistent with dark matter particles with mass of the order of 1 TeV. Different models on the nature of dark matter predict different behaviour of the positron excess above the positron fraction expected from ordinary cosmic ray collisions. Therefore, results at higher energies will be of crucial importance in the near future to evaluate if the signal is from dark matter or from a cosmic source.

"With AMS and with the LHC to restart in the near future at energies never reached before, we are living in very exciting times for particle physics as both instruments are pushing boundaries of physics,” said CERN Director-General Rolf Heuer.

AMS also reported a new observation that both the electron flux and the positron flux change their behaviour at about 30 GeV, the fluxes being significantly different from each other both in their magnitude and energy dependence. In particular, between 20 and 200 GeV, the rate of change of the positron flux is surprisingly higher than that for electrons. This is important proof that the excess seen in the positron fraction is due to a relative excess of high-energy positrons, and not the loss of high-energy electrons. This new result is very important for a better understanding of the origin of cosmic ray electrons and positrons, and may be the sign of an unknown phenomenon.

In his seminar, Professor Ting also presented some interesting new results to be published in the near future. These show that, at high energies and over a wide energy range, the combined flux of electrons plus positrons can be described by a single constant spectral index, with no existence of structure as suspected by previous measurements of other experiments.

1 The AMS detector is operated by a large international collaboration led by Nobel laureate Samuel Ting. AMS involves about 600 researchers from China, Denmark, Finland, France, Germany, Italy, Korea, Mexico, the Netherlands, Portugal, Spain, Switzerland, Taiwan, and the United-States. The AMS detector was assembled at CERN, tested at ESA’s ESTEC centre in the Netherlands and launched on 16 May 2011 onboard NASA’s Space Shuttle Endeavour. It is installed on the International Space Station where it tracks incoming charged particles such as protons, electrons and antimatter particles such as positrons, mapping the flux of cosmic rays with unprecedented precision.

2 CERN, the European Organization for Nuclear Research, is the world's leading laboratory for particle physics. It has its headquarters in Geneva. At present, its Member States are Austria, Belgium, Bulgaria, the Czech Republic, Denmark, Finland, France, Germany, Greece, Hungary, Israel, Italy, the Netherlands, Norway, Poland, Portugal, Slovakia, Spain, Sweden, Switzerland and the United Kingdom. Romania is a Candidate for Accession. Serbia is an Associate Member in the pre-stage to Membership. India, Japan, the Russian Federation, the United States of America, Turkey, the European Commission and UNESCO have Observer Status.