There is five times more dark matter in the Universe than “normal” matter, the atoms and molecules that make up all we know. Yet, it is still unknown what this dominant dark component actually is. Today, an international collaboration of scientists inaugurated the new XENON1T instrument designed to search for dark matter with unprecedented sensitivity, at the INFN Gran Sasso Underground Laboratory in Italy. 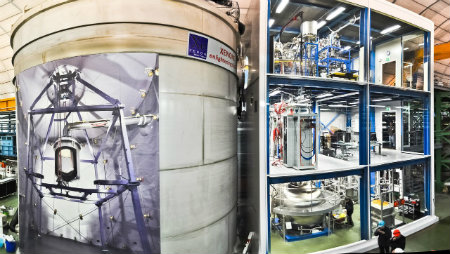 Hall B of LNGS with XENON installations: The building in front houses various auxiliary systems, the detector itself is installed inside the large water shield in the back. (Image: INFN)

Dark matter is one of the basic ingredients of the Universe, and efforts to detect it with laboratory-based experiments have been ongoing for decades. However, until today dark matter has been observed only indirectly via its gravitational interactions – the interactions that govern the dynamics of the Cosmos at all length-scales. It is expected that dark matter is made of a new, stable elementary particle which has so far escaped detection. About 100,000 dark matter particles are expected to pass through an area of 1 cm² per second. The fact that these particles have not yet been directly detected puts stringent constraints on their tiny interaction probability with the atoms of ordinary matter. It also implies that more sensitive instruments are required to find the rare signature of the dark matter particle. The international XENON Collaboration, consisting of 21 research groups from the United States, Germany, Italy, Switzerland, Portugal, France, the Netherlands, Israel, Sweden and United Arab Emirates, celebrated the inauguration of their new XENON1T instrument today, which will search for dark matter with unprecedented sensitivity.

The event took place at the Gran Sasso National Laboratory of the Italian National Institute for Nuclear Physics (INFN-LNGS), the largest underground laboratory in the world for astroparticle physics. The inauguration was attended by the XENON scientists along with guests from funding agencies as well as journalists and colleagues. About 80 visitors were able to join the ceremony directly at the experimental site in the 100m long, 20m wide and 18m high hall B of LNGS, which is itself below 1400m of rock. Here, the new XENON1T instrument is installed inside a 10m-diameter water tank to shield it from radiation which originates from the environment. Even more guests followed the introductory presentations in the LNGS auditorium, where Elena Aprile, Professor at Columbia University (New York) and founder of the XENON project, illustrated the evolution of the XENON program from the early beginnings with a 3kg detector 15 years ago to the present-day instrument XENON1T with a total mass of 3500kg.

Assembly of the XENON1T TPC in the cleanroom. (Image: INFN)

XENON1T employs the noble gas xenon as the dark matter detection material, which must be made ultra- pure and cooled down to –95°C to make it liquid. The large-mass instrument features an extremely low radioactive background in order to be able to identify the rare events from dark matter interactions. For this reason, the XENON scientists have carefully selected all materials used in the construction of the detector, ensuring that their intrinsic contamination with radioactive isotopes meets the experiment's low-background strict requirements.

The XENON1T detector measures the tiny flashes of light and charge which are generated when a particle interacts with the xenon. The scientists use this information to reconstruct the position of the particle interaction within the detector, as well as the deposited energy and whether the interaction may have been induced by dark matter. The light is observed by 248 sensitive photosensors, which are each capable of detecting even single photons. A vacuum-insulated double-wall cryostat, essentially a gigantic version of a thermos flask, contains the cryogenic xenon and the dark matter detector. The xenon gas is cooled down and purified in the three-story tall XENON building, a fancy installation with a transparent glass facade right next to the water tank, allowing visitors to actually see what the scientists are doing inside. A gigantic stainless-steel sphere equipped with pipes and valves is installed on the ground floor. It can accommodate 7.6 tons of xenon in liquid and gaseous form, more than two times the capacity needed for XENON1T. This will allow the collaboration to swiftly increase the sensitivity of the experiment by using a larger mass detector in the near future.

Aiming for a dark matter detection

Once fully operational, XENON1T will be the most sensitive dark matter experiment in the world. The detector installation has been completed just a few days ago and the first tests of its performance have already been started. The first science results are expected early 2016, as only one week of good data is sufficient to yet again take the lead in the field. The design goal of the experiment will be reached after two years of data taking, as the collaboration explains in a detailed sensitivity study published at the same time as the inauguration. The ultimate goal is the detection of the dark matter particle. Still, even if there are only some hints found after two years of operation, the XENON collaboration will be in an excellent position to move forward, as the next phase of the project, XENONnT, is already being prepared. It will largely use already existing infrastructure, and will increase the sensitivity to dark matter by another order of magnitude.