30 September 2018 -  From deep under the North Sea, to the outskirts of Rome and the Canadian shores of the Pacific, the winning images from the 2018 Global Physics Photowalk competition announced today capture the beauty, precision and international nature of humankind’s search to understand the Universe.

Selected from thousands of images submitted by hundreds of amateur and professional photographers around the world, the Global Physics Photowalk provided a rare glimpse into the people, engineering and technology behind some of the world’s most inspiring, amazing and sometimes oddest science.

The 18 participating laboratories study science topics ranging from exploring the origins of the Universe to better understanding how our planet’s climate works, and from improving human and animal health to helping deliver secure and sustainable food and energy supplies for the future.

Each lab held their own local competition, and has now entered their top three images into the global competition. From those images, a public online vote chose the top three, while a panel of expert photographers and scientists also chose their three favourites. The winners were announced at the international ASTC annual conference in Hartford, Connecticut.

The competition was run by the Interactions Collaboration of global particle physics laboratories. It was supported by the Royal Photographic Society and Association of Science-Technology Centers.

Dr Vanessa Mexner is a science communicator at Nikhef, the National Institute for Subatomic Physics in the Netherlands. She represented the Interactions Collaboration on the judging panel and described the competition as inspiring and amazing.

She said: “The pictures capture the beauty of science and the people behind this in such an amazing way. Through all these wonderful pictures, we can offer a broad audience a unique glimpse into the people, the engineering and technology, the science – so a big ‘thank you’ to all the photographers who took part in the global competition."

Professional photographer Enrico Sacchetti was a member of the international judges’ panel. Commenting on Simon Wright’s winning image he said: “The lighting is what attracts you to this silent but powerful image. It’s great seeing her completely at ease in this lonely environment.”

Panel member Ale de la Puente, a Mexican artist and designer, also praised the winning image: “Alone where the unknown still lies, there is light, darkness, and a shadow cast that intriguingly take us deep back to the tunnel, beyond the excellence of technique the metaphor of pushing the horizon far away from light and our view is compelling.”

Photographer Simon Wright said: “To say I am on cloud nine would be an understatement, I still keep saying ‘WOW!’. Each location was completely different and I really enjoyed the opportunity to talk to the scientists and staff during the photowalks too.”

Canadian photographer Jon McRae’s image from the TRIUMF lab won second place in the public vote and was awarded the judges’ equal third.  Ale described the image as: “An enchanting metaphor of the photographed, the illusion of the unreachable to our perceptions held in a hand”.

Enrico and Ale also praised Stefano Ruzzini’s image of a silicon-strip particle detector taken at the Frascati National Laboratories of the Italian Institute for Nuclear Physics.

Ale said: “Not only the colors, the symmetry, and quality of the image, but the mysterious beauty of a contemporary technology mandala, reminds the endless search for knowledge.” 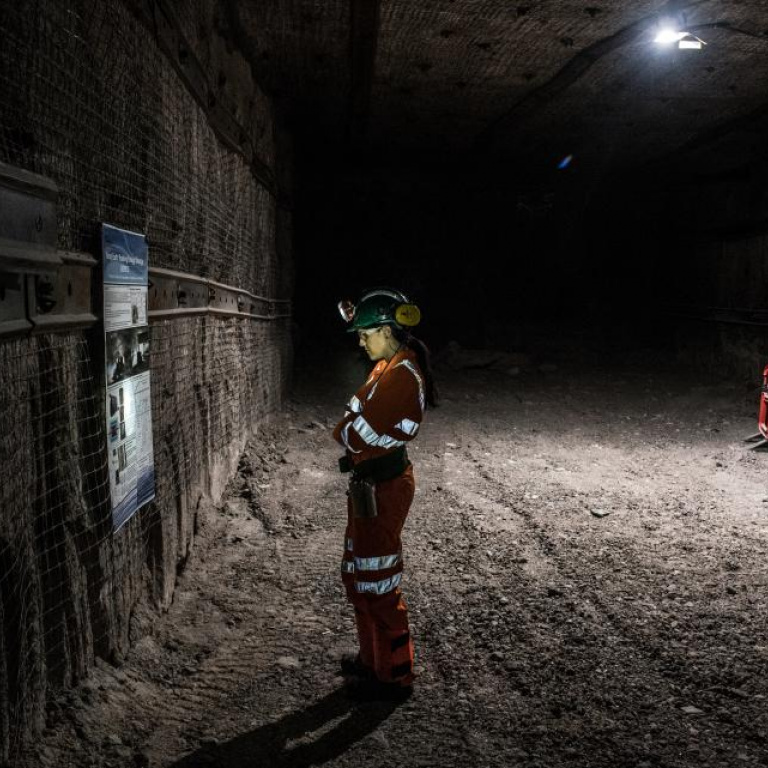 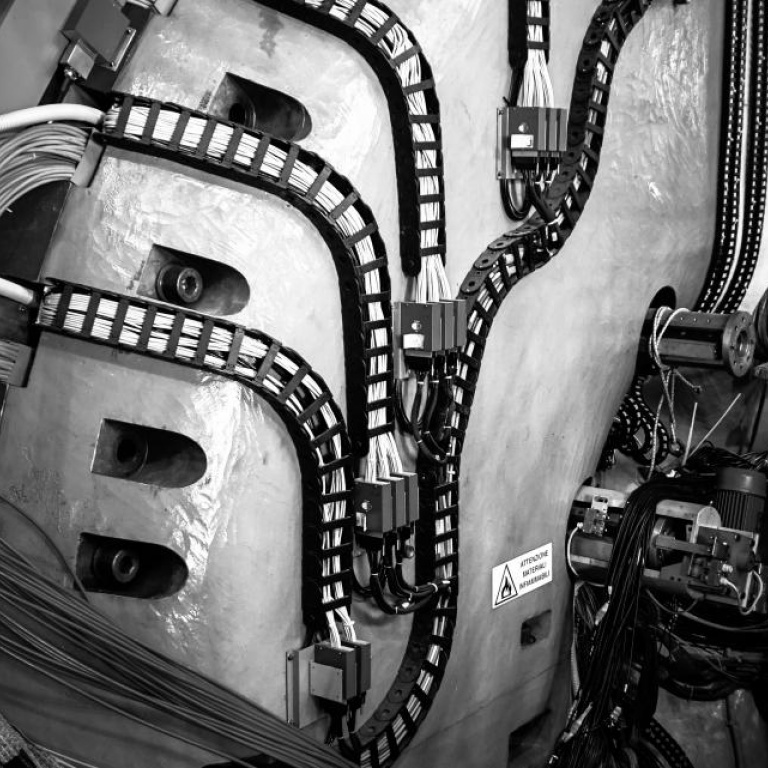 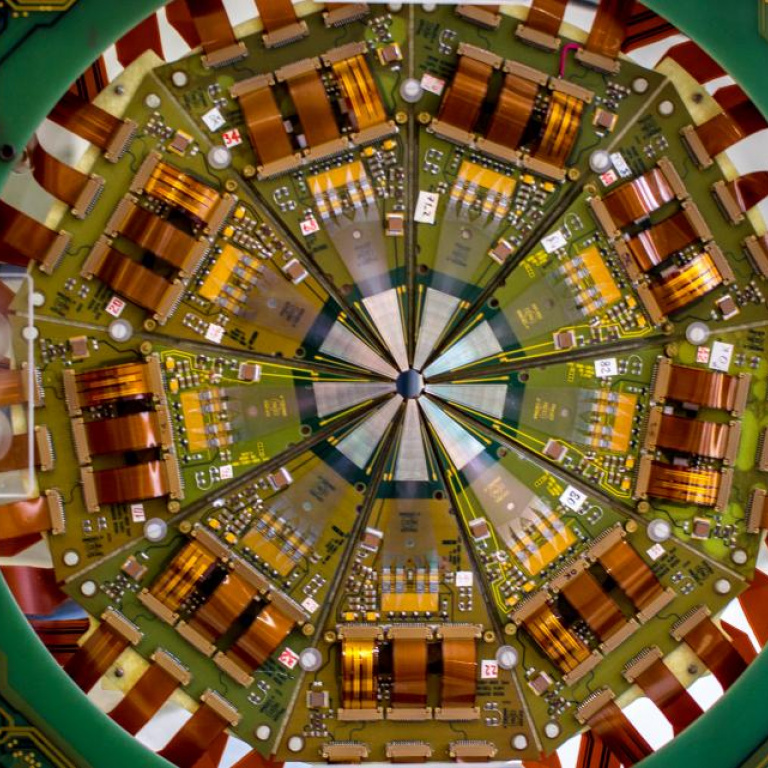 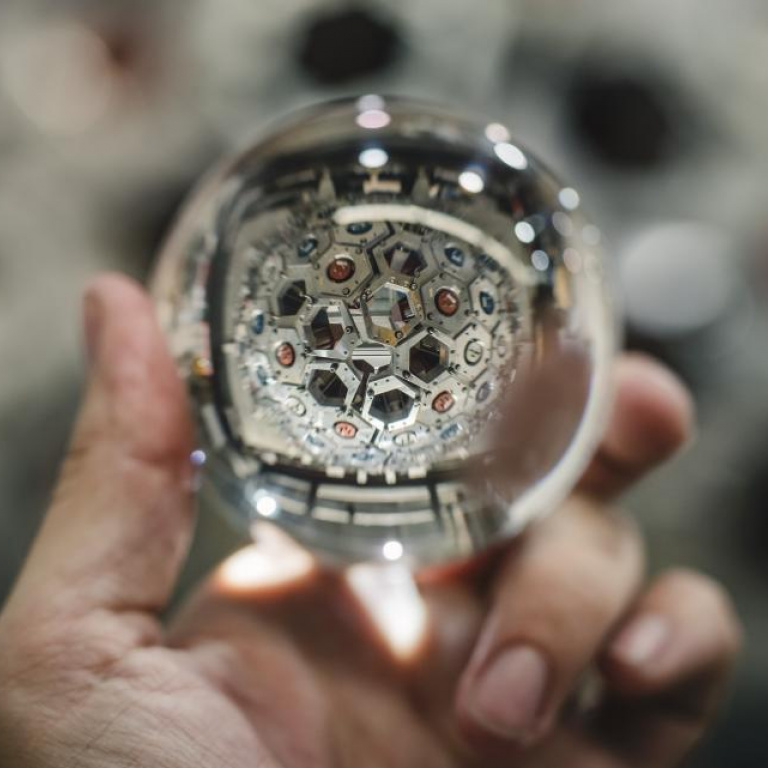 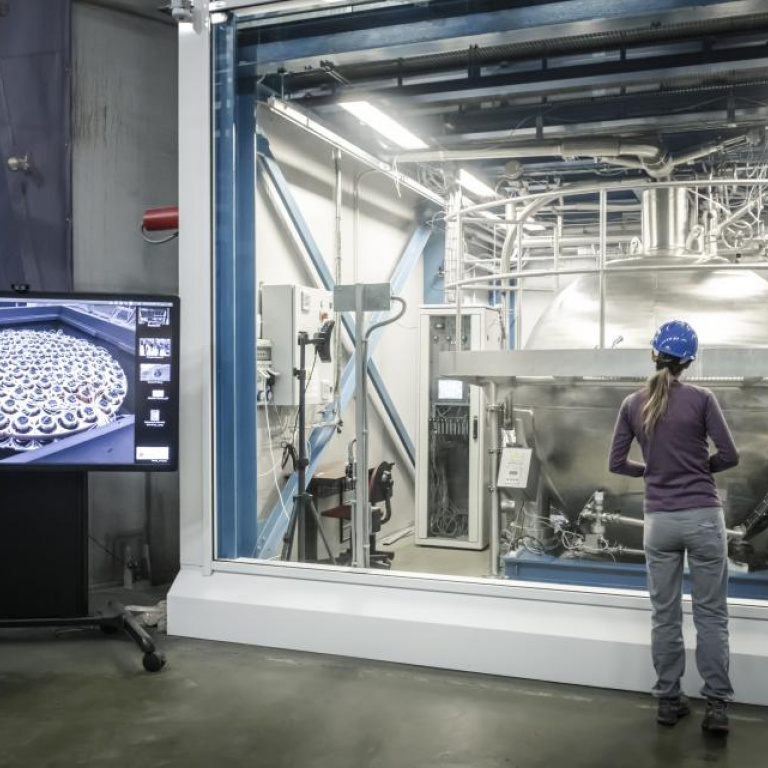 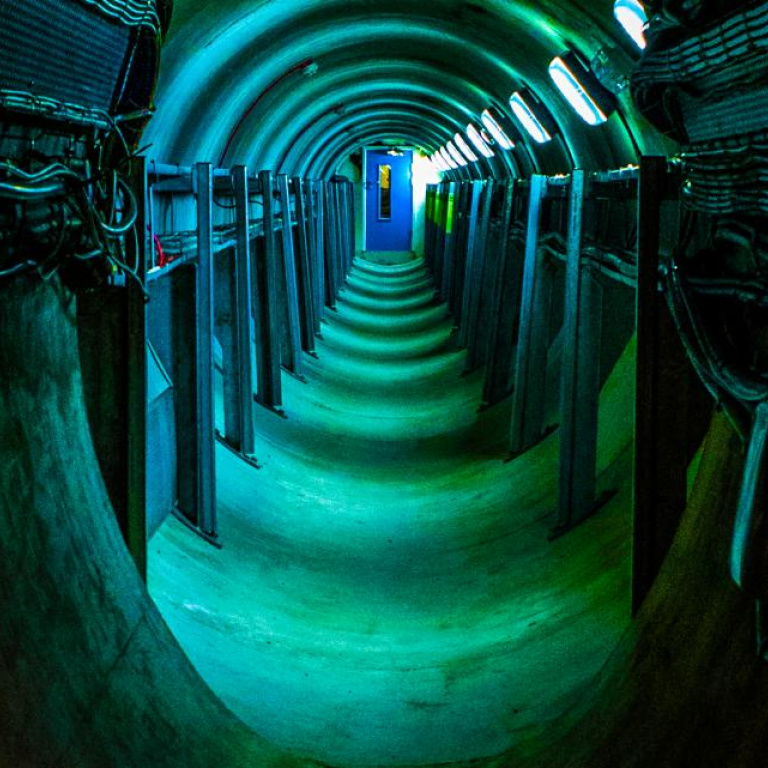 KLOE2 is a detector devoted to the study of the origin of the asymmetry between matter and antimatter in our Universe. It has operated at the DAFNE collider of electrons and positrons (anti-electrons). KLOE and DAFNE are at Frascati National Laboratories of the Italian Institute for Nuclear Physics (INFN), a crucial place in particle physics’ history. Here, the first electron-positron collider was designed and built. Its name was AdA (Anello di Accumulazione) and it can be considered as the CERN Large Hadron Collider’s grandmother. Luca Riccioni has been able to capture in this picture the conceptual and physical beauty of a particle physics experiment.

Shining a light on Dark Matter - Deep under the North Yorkshire moors in the UK, physicists at the STFC Boulby Underground Laboratory play a lead role in the search to detect and understand the mysteries of Dark Matter. Just five per cent of the Universe is visible matter - stars, planets, galaxies, ourselves. The rest is called ‘Dark Matter’ for obvious reasons, and although not actually yet detected its existence has been inferred from numerous astrophysical observations taken over a vast range of distance and time scales. Located 1.1 kilometres underground in Europe’s deepest operating mine, the Boulby lab is almost entirely free of outside interference – allowing physicists a perfect “quiet” area to develop new techniques in the quest to detect and analyse Dark Matter. Photographer Simon Wright cleverly used a miner’s lamp to highlight the face of STFC’s Tamara Leitan as she scanned an information board at the Lab, thus avoiding the need for a flash which would have strobed off the safety equipment all workers and visitors must wear at the mine. Judges praised the photo’s composition and technical qualities.

At the far western edge of Vancouver, B.C., mere metres from where dense rainforest gives way to Pacific ocean, researchers at TRIUMF wield some of the world’s best tools for uncovering the fascinating dynamics at play within atomic nuclei. DESCANT (the Deuterated Scintillator Array for Neutron Tagging; pictured) is a concave particle detector that can be mounted on two different experiments that delve into nuclear structure and dynamics at TRIUMF, TIGRESS and GRIFFIN. DESCANT combines with these experiments to drive leading-edge discoveries about the structure of the atomic nucleus and the forces that hold it together. Photographer Jon McRae (Four Eyes Photography) shot this intriguing perspective on DESCANT using a small, spherical lens. Holding the lens between camera and detector array, McRae recreated a miniature simulacrum of DESCANT in the crystal-clear glass ball, cleverly highlighting its compelling shape and geometry.

A silicon-strip particle detector employed in the NA50 experiment at CERN, Geneva, and now at Frascati National Laboratories of the Italian Institute for Nuclear Physics (INFN). The objective of the experiment was to study collisions between Lead nuclei. In the photo of Stefano Ruzzini, the perfect symmetry of the components of the detector seems to mirror the symmetry of the laws of Nature, investigated by the experiment. This feature has been praised by the judges as well as the photographer's technical expertise to portray the three dimensional aspect of the detector.

A researcher observes Xenon1t, an experiment placed in the cosmic silence of the Gran Sasso National Laboratories of the Italian Institute for Nuclear Physics (INFN), the largest particle and astroparticle physics underground laboratories in the world. The objective of the experiment is to detect direct evidence of dark matter by using 1ton of liquid Xenon. A monitor displays the images of the inner detector of the experiment.  Judges admired Gianluca Micheletti's overall composition of the image in evoking the sense of curiosity at the heart of physics.

Royal Photographic Society:
The RPS is a registered UK charity, supported by its 11,600 members. Founded in 1853, to promote the art and science of photography, its objectives today are to educate members of the public, promote the highest standards, and to encourage the public appreciation of photography. It does this through public events and activities, exhibitions, and its educational activities.

Association of Science-Technology Centers:
The ASTC is a global organization providing collective voice, professional support, and programming opportunities for science centers, museums, and related institutions, whose innovative approaches to science learning inspire people of all ages about the wonders and meaning of science in their lives. ASTC has more than 650 members in nearly 50 countries around the world. Our members reach over 95 million visitors each year and offer programs to inspire youth, train educators, and engage the public in science’s vital role in solving the crucial problems facing society and helping communities build towards an aspirational future.