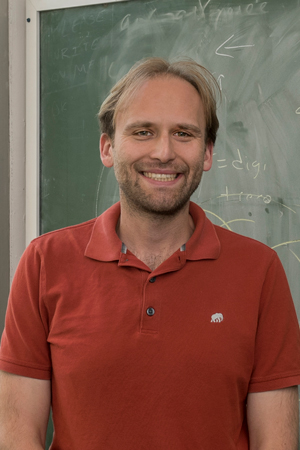 Though I was based at CERN in 2012 as a postdoc, I was not one of the lucky few in the main CERN auditorium for the Higgs discovery. I had just returned back to the lab after some travel and was jet-lagged and overtired, and had no interest in waiting in line overnight for a seat harder to snag than 50 yard line Super Bowl tickets. Instead, I spent the Higgs discovery announcement in my office, hitting reload over and over as the video connection kept going in and out. One of my fondest memories of those days was an e-mail from my mom in New Jersey, 7 times zones away from CERN, asking: “In simple terms, can you tell me what happened today?” When I tried to explain my overwhelming excitement at ending 40 years of searches for the last big, missing piece of the Standard Model of particle physics, she told me only: “That sounds important.”

It was and is indeed important. And though I did not work directly on the Higgs boson discovery, it helped to push my career all the way through to my current faculty position, and has guided my research ever since. Before the discovery, I worked on a variety of Standard Model measurements and new physics searches for my postdoc on the ATLAS experiment, but soon after July 2012, I transitioned to focusing on using the Higgs boson as a tool for exploration, and have not looked back ever since.

There is a long history of such a path in particle physics; observation of new, even expected processes leads to precision measurements, followed by detailed exploration and innovative ways to search for new physics. For example, the top quark was discovered using the Tevatron at Fermilab in 1994-1995. By the time I was a graduate student, one of the big open questions was the mass of the top quark, and my Ph.D. thesis in 2008 used new tools to precisely extract the mass of this particle, discovered only ~1 decade earlier. By the time of the startup of the LHC a few years later, both the Tevatron and the LHC were both using the top quark as a tool to both directly (for example, looking for new particles like Z’ decaying to pairs of top quarks) and indirectly search for new physics (by comparing kinematic distributions of top quarks to expectations from theory).

When I tried to explain my overwhelming excitement at ending 40 years of searches for the last big, missing piece of the Standard Model of particle physics, she told me only: “That sounds important.”

My journey to using the Higgs boson as a tool for discovery really kicked into high gear shortly after July 2012 with the LHC’s first search for pair production of Higgs bosons (hh). As I’m fond of telling people - if one Higgs boson was great and amazing, think how great two would be! And…. we found a small excess! Unfortunately, that excess turned out to be a statistical fluctuation that disappeared with more data. It’s funny to think back to that search; unlike most LHC analyses filled with dozens of team members, we were really only two people working on the search from start to finish. It was more fun and rewarding that any other analysis I’ve worked on at the LHC. And it really was the first step towards the development of a huge program of exciting physics for the LHC. As I write this, a group of experimentalists and theorists is gathering in Croatia for a Higgs Pair workshop with 126 registered participants. A big change from two physicists working alone late at night and on weekends.

I’m pretty comfortable saying that without the discovery of the Higgs boson and the follow-up search for pairs of Higgs bosons, I would likely not be where I am in my career as a tenured faculty member at Northern Illinois University. Faculty positions are really scarce, and there are a lot of super great physicists out there. Why did I get a position? I’d like to think I’m smart, hard-working and full of great ideas and a fine sense of humor, but sometimes it’s also about being in the right place at the right time. Our search for pairs of Higgs bosons produced in the same collision helped me to stand out in a really crowded field of other smart, hard-working physicists.

Unfortunately, Higgs bosons are not typically produced in pairs. For every pair of them produced in a single collision, the LHC produces ~1,000 single Higgs bosons. Remembering that it took ~40 years to find single Higgs boson production, it might not be so surprising that we likely need another few 1-2 decades of data to even potentially observe Higgs boson pair production. So why is it so exciting and why are we bothering? One simple reason is that lots of plausible models of new physics predict enhancements to the hh production rate. But even the Standard Model observation of hh production would be exciting to observe, as it tells us something about this bizarre, strange Higgs field that permeates all of space.

Fields are odd, strange things; they are quantities that exist at all points in space and time, and are really the fundamental objects in particle physics. The most familiar field to those who have taken some physics in high school or university are the fields responsible for electricity and magnetism. The default value of the magnetic field is zero in the Universe. In other words, magnets don’t always try to point in one direction (though the Earth’s magnetic field tries to change this). Similarly, the baseline electric field is zero; there is no current surging through the wires in your house until you flip a switch and apply a potential difference to turn on your lights. The Higgs field is different, however. The preference for the University is to have a non-zero field everywhere. As you read this, as you sleep in bed and as you walk to the coffee machine, you are surrounded everywhere by a non-zero field (I often joke during talks that living in the Midwest is like being surrounded by two non-zero fields, the first being corn. My DadJoke™ power is strong). I find this super cool, and the most direct way to verify it would be to observe one Higgs boson splitting into two Higgs bosons before decaying; it is the non-zero value of the Higgs field that is responsible for the Higgs boson’s ability to interact with itself.

As the 10th anniversary of Higgsdependence Day arrives, my group is also using the Higgs boson as a tool for exploration in more indirect ways. My senior grad student helped to push for the publication of precision tests of our understanding of the Higgs boson, most notably how often they are produced (cross sections). We measure these cross sections inclusively, but also in bins, which we call differential cross sections. These differential cross sections measure things like “how often is a Higgs boson produced with this distance to the proton beam” or “how often is a Higgs boson produced with this much momentum?” These are simple basic questions, and their power comes when we compare our measurements to predictions from theorists. With all the data in hand 10 years after the Higgs discovery, I love that we can make precision measurements in a similar vein to what I worked on for my Ph.D. thesis. Such tests are more powerful now, as we can make those differential bins more fine-grained and still have enough data to draw interesting conclusions. And if we don’t find new physics, we can help theorists to better hone their models for Higgs boson production.

What does my group plan on for the future, for the next 10 years? Well, we’re focusing on a better understanding of backgrounds to lots of Higgs boson measurements and searches (diphoton plus heavy flavor measurements), as this will allow us to use our tools more appropriately. We’re also continuing to improve searches for Higgs boson pair production, such as by adding new ways that that hh can be produced (the VBF production mechanism). And we’re getting involved in even more direct searches for new physics, like production of a new particle (vector-like B quark) that decays to a Standard Model-like bottom quark and a Higgs boson. My postdoc and I worked on an earlier version of that analysis and my new student just joined an analysis team to redo it with more data. Another use of the Higgs boson as a direct tool! Beyond that, my work for the future LHC upgrades (HL-LHC) is really motivated by Higgs boson physics: How will we find interesting Higgs boson events, and how will we observe Higgs boson pair production? My 4.5-year old son likes to talk to his parents what they do for work. He is fond of talking about all the “doctor tools” that my wife uses in her medical practice, and writing this for the special Higgs anniversary makes me realize that I should start stressing the “Higgs boson tools” that I use in my work, too.